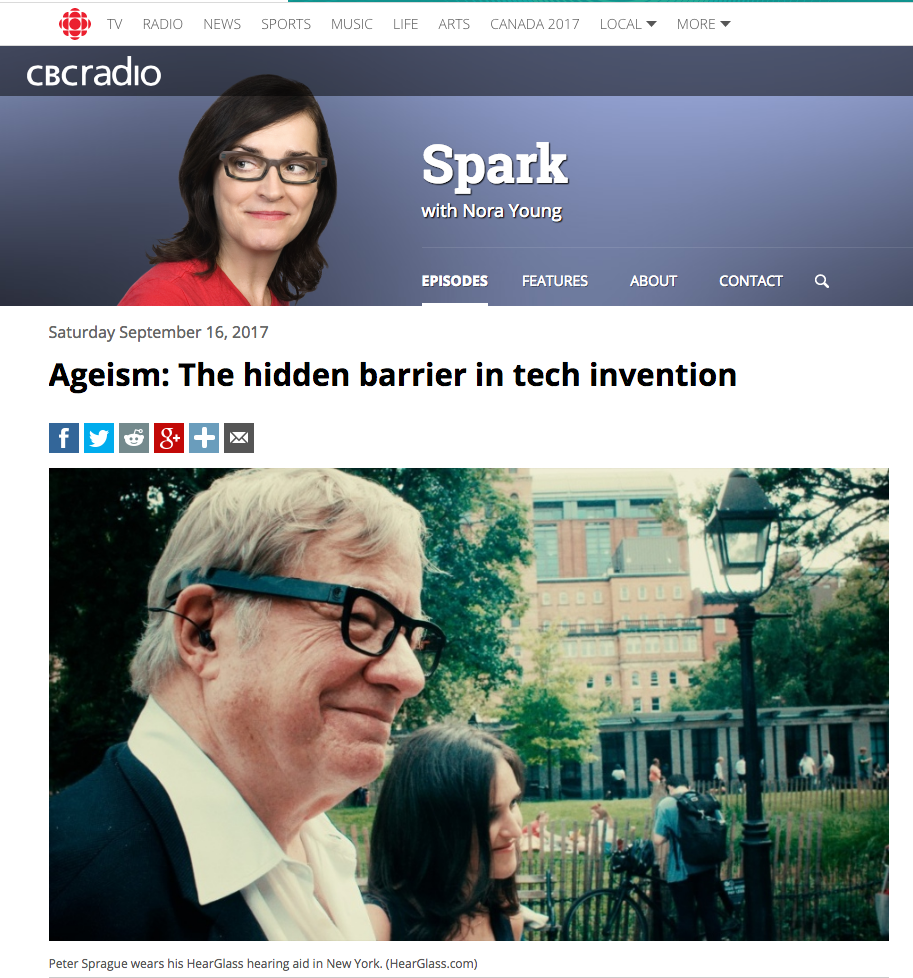 By HearGlass AdminSeptember 19, 2017News
No Comments

The HEARGLASS story picked up on Canadian broadcast station and site

When you think of a typical tech startup, what do you think of? Is it a bunch of twenty-somethings fresh out of university with computer science degrees, pitching their latest idea for a food-delivery service to angel investors or venture capitalists?

If so, that’s not too far from the norm. And in that lies a problem: not every inventor fits into that culture. Because who we think is a tech inventor, and who we imagine is the market for a tech product, can limit the tech we get.

Over the years, he’s done some amazing things as an entrepreneur: he rescued the British sports-car company, Aston Martin, from bankruptcy (the car made famous as James Bond’s preferred brand), and was chairman of the influential tech company National Semiconductor (now Texas Instruments).

But now that he’s older, he’s dealing with the realities of aging. And among those challenges is the loss of his hearing.

For Peter, the loss of his hearing is especially challenging, because he’s a serious audiophile. And most hearing aids, despite costing up to ten-thousand dollars, don’t do a very good job of translating the nuances of a live concert into high-fidelity sound.

Moreover, being a man willing to acknowledge his own vanity, Peter wanted a way to hear music without appearing to everyone else that he was going deaf.

So he set to work on his own version of a hearing aid, called HearGlass, which uses analogue microphones to record better sound.

But the problem with building a high-fidelity hearing aid is that it’s cumbersome. So he’s using glasses frames to conceal the microphones and electronics.

And the HearGlass features a clever tool called the “What” button, that allows users to play back the last few seconds of what someone just said to them. “I think we could sell them on that feature alone,” he says.

The HearGlass hearing aid, which conceals its electronics in the arms of a pair of glasses. (HearGlass.com)
Peter hopes hearglass may address a cultural issue around hearing aids as well. “Men seem to be averse to buying hearing aids,” he says, suggesting they like to avoid things that are “billboards” for getting old.

And he may have a point, especially when it comes to displaying age, because it turns out that his age counted as a big strike against him when he sought funding from venture capitalists.

“It would be easier if we were four 26-year-olds coming out of Waterloo,” he says. “Now I’d look like what a startup is supposed to look like. It’s a problem. I’m not the only old geezer around inventing stuff.”

HearGlass is now on its fourth prototype, and is almost ready for commercial release.

So what did Peter do? He turned to another, more receptive audience: his peers who also suffer from hearing loss, and raised money from other septua- and octogenarians who were willing to fund his venture.

Facing ageism, and not having access to the traditional methods of financing and market a typical tech startup may face, Peter has also had to be creative in his attempts to get HearGlass to market.

HearGlass is envisioning a subscription system where customers pay a monthly fee that would keep the technology up to date, and add new features as they become available.

The HEARGLASS story picked up on Canadian broadcast station and site

© 2021 HearGlass. HEARGLASS technology is protected by patents, both issued and pending